Herbert “Buck” Long, age 74, of Riverside was killed on Sunday, August 26, 2018 in a tragic and senseless accident while enjoying his weekly Sunday morning motorcycle ride. He was driving in traffic, at 6:30 in the morning, when an 18 year old intoxicated driver ran into him head on. Buck was killed instantly. The driver then fled the scene, but was later found by police hiding in a nearby ravine.

About our Dad, Buck:

Buck was born on March 22, 1944 in High Point, North Carolina. His father was an officer in the military, and at an early age he relocated with his family to post-war Germany. He attended elementary and middle school there and became a fluent German speaker.

He moved to the Downtown Riverside area in the late 50’s when his Father was stationed at March Air Force Base. He attended both Poly and Ramona High Schools. After graduating from Ramona High School in 1962, he immediately joined the United States Navy. He served as a Radioman aboard the aircraft carrier U.S.S. Kearsarge, which was recovery ship for the last two manned Project Mercury space missions in 1962 – 63. He was always very proud that he was able to participate in a small part of the legendary ‘Space Race’.

Upon leaving the Navy in 1964, he returned to Riverside and worked for Sears Roebuck, where he met his soon-to-be wife, Victoria. They were married in 1972. In 1977 their first son was born, Travis. In 1979, came their second son Colby, and in 1985 their third, Christopher.

After working his way up to Regional Service Manager, he left Sears In 1987 to join Harpure Enterprises, a water treatment manufacturing and service company based in Los Angeles. He became President of Harpure in 2000 and subsequently purchased the company and its subsidiaries in 2016. All three of his sons worked with him and continue to work at his Company.

Buck’s passions in life were his family, his friends, his company, his motorcycles & cars, working with his hands, cycling & running, snowboarding & surfing, the Rotary Club, and the Oakland Raiders. Those that knew him will tell you he was the youngest and healthiest 74-year-old anyone has ever met. He will be sorely missed by all those whose life he touched.

Buck is survived by his wife of 46 years, Victoria; his three sons, Travis (Carmen), Colby (Anna), and Chris (Janel); and his three Grandchildren, Mia, Maddox, and Axel.

Our Dad was described in some newspaper reports as "elderly", and I must say that when my family and I read this we had a much needed laugh. My Dad was in all likelihood younger in spirit and in health than the authors of those articles. Just to make my point, below is a photo of "our old man" taken back in 2008, at the age of 64. He was at racing school... where he showed up the other, much 'younger' students. He was one bad ass SOB; and he's a lot for us to live up to: 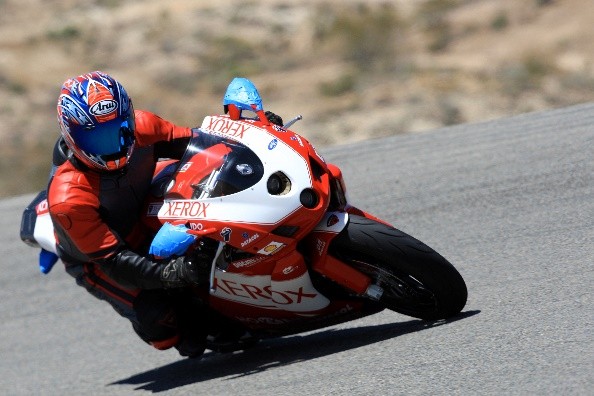